When the temperature starts to rise, wearing the usual thick clothes starts to feel stuffy. Same goes for accessories like shoes. If you are one among the people who are worrying about wearing shoes to work in the hot months then you need to consider getting a pair of mens dress sandals. Mens dress sandals are enjoying the height of popularity in the recent times. In this article we are going to discuss the styles of mens dress sandals and how best to style them for an appropriate look.

Closed toe shoes are the ones that we mostly go for when it comes to office use. Most tend to shy away from the open toed ones simply because they aren't used to this style. Also when it comes to formal use, most wonder if wearing the sandals is an appropriate look. But the times aren't the same as before and many organisations have started relaxing the dress code rules of the corporate environment. With the dress codes becoming comfort friendly it is the perfect time to go dressed in mens dress sandals. But not every sandals will make the cut for the formal style. There are a lot of styles in the sandals and you need to select the right one that will look appropriate with the formal outfit that you are wearing.

Mens sandals come in variety of styles and there is a choice for everyone. For example if you are into outdoor activities then you can go with hiking style sandals or sliders. If you are focusing more on the comfort factor then you can go with soft sandals. But if you want a smarter stylish pair that you can wear with tailored trousers then you should go with mens dress sandals. However styling the mens dress sandals is an important factor. One misstep can lead you looking like a lost tourist in the city. So make sure that you get the basics right and then rock the mens dress sandals look. 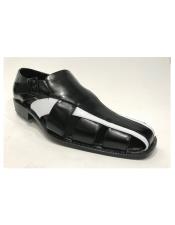 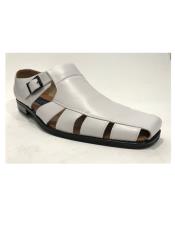 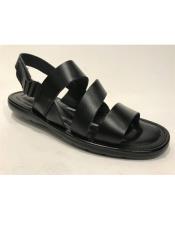 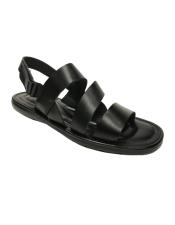 Other than this people looking for dressy mens sandals can go with exotic skin sandals.Alligator sandals and crocodile skin sandals are the ones that are most preferred. Apart from this you can also go with options like python sandals and ostrich sandals. These animal skin sandals will be best to pair with formal outfits when you attend a dressy event. The cost of these sandals will also be high when compared with the leather ones. Also there are a lot of fake ones in the market and therefore it is always best to go with products from trusted brands like Belvedere sandals and Stacy Adams sandals to ensure the authenticity and quality.

The next thing that you will have to note is the color of the mens dress sandals that you choose. Go with dark colored ones if you are intending to pair it with formal clothes. Black sandals and brown sandals are the ones that are most preferred when it comes toformal sandals. On the contrary if it is a semi formal event like summer weddings then you can go with lighter colored ones like beige sandals and cognac sandals.

Beach weddings are one of the best events for styling the mens dress sandals. When you attend the beach weddings most of us get confused on what footwear to go with. It is hard to wade through the sand while wearing shoes and the heat also catches up when it comes to closed toe shoes. In these cases mens dress sandals are the best choice to go with.White sandals and cream sandals are some of the recommendations when it comes to beach weddings. The lighter colors stand out too much in winter but with summer they work great. Other than this you can also go withtwo toned sandals for a more stylish look.

As for some of the styling ideas for the mens dress sandals we are going to suggest some looks that you can go with. For a smart casual look you can pair the black mens dress sandals with white chinos, grey crew neck t-shirt and a gray blazer. You can complete the look with black sunglasses and silver watch. For a summer wedding look you can pair the mens closed toe sandals with a white suit. Add a light blue dress shirt and multi colored plaid tie to the mix.

If you are thinking of pairing the mens dress sandals with shorts then here are some suggestions. Green sandals with tan shorts and plaid long sleeve shirt is a cool look. You can also pair black sandals with navy shorts, white t-shirt and light blue denim shirt for a laid back look.