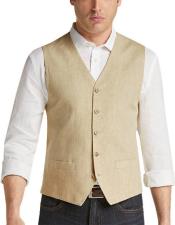 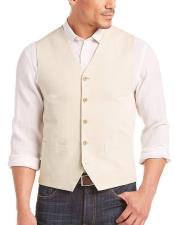 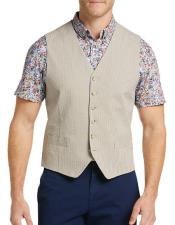 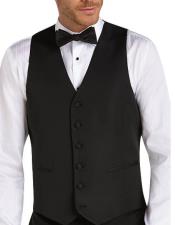 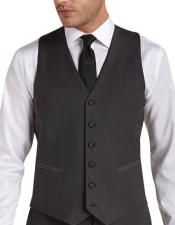 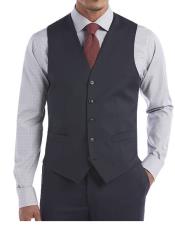 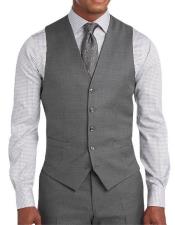 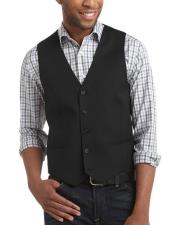 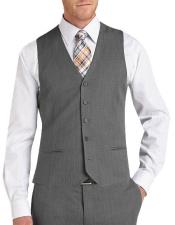 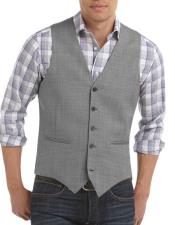 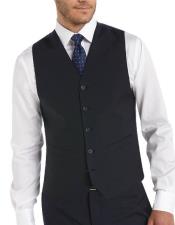 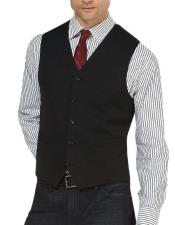 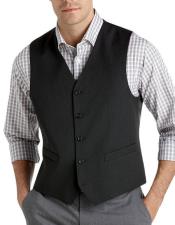 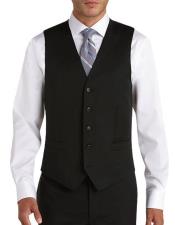 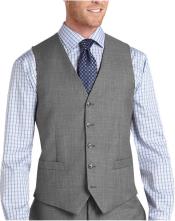 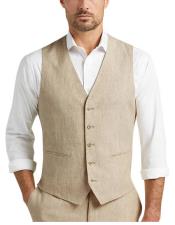 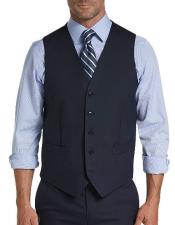 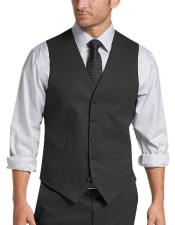 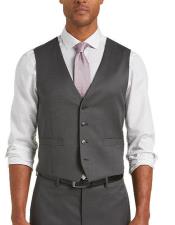 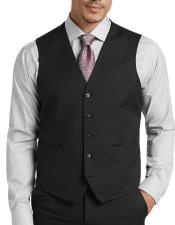 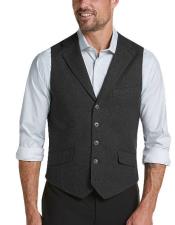 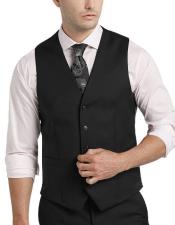 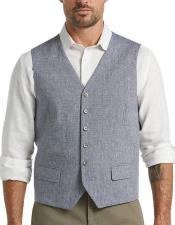 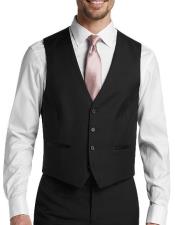 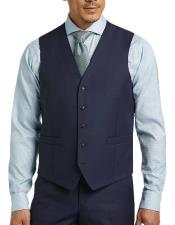 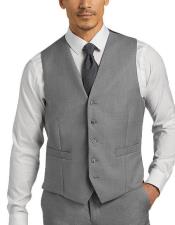 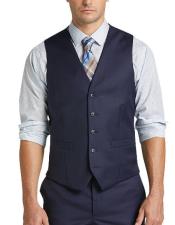 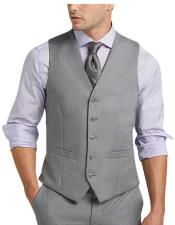 Mens suit vests were once the standard wear in mens fashion. There was a time when not wearing a vest is considered a very poor style. Time has changed and vests have been out of fashion for a long time with men turning to two piece suits. Also, the corporate organizations relaxing its restrictions on their dress code has increased the usage of casual styles thus making the vest fashion dwindle. But recent times are seeing an increasing surge of this style on runways and red carpets preparing it for a comeback.

If you are new to this style it doesn't mean you will have to shy away from it. Most men do not know how to style it properly keeping in par with the recent trends. Mens suit vests when chosen and wore properly can up your fashion game to a great deal. But getting an ill fitting style can take you back to at least 30 years making you look sloppy. So when trying this style it is important to know about the details which make or break the look. Here in this article we have put together all the things you will have to note when buying a vest whether separately or as a full suit thus making it easier for you to choose.

First of all for people who don't know it already what is a mens suit vest? A mens suit vest is an upper body garment that is sleeveless and worn mostly over a dress shirt and under the suit jacket. So if this is what is a mens suit vest then what is a waistcoat? Waistcoat is the same as the mens suit vest. The confusion is because of the fact that the garment changes its name geographically. While in England it is called a waistcoat it is widely known as vests in America. While in England it is considered to be more of a formal garment that is worn along with a tie, in America it is an informal garment.

When it comes to the length of the mens suit vest it is imperial that for the double breasted style fully covers the waistband. As for the single breasted styles the length should end just above the waistband. In any case the fabric of the shirt that you wear underneath should not show at any point. For this the shirt should also be fitted properly so that the fabric does not get bunched up under the mens suit vest. The armholes of the mens suit vest should be large enough so that you have freedom of movement without any restrictions.

If the fit of the mens suit vest is too tight then the fabric pulling at the button area and the back of the vest will definitely result in showing of the shirt fabric thus nullifying the whole purpose of the garment that is creating an unbroken vertical line right from the shoulders to the heel.

If you are a short person then go with mens suit vests with less number of buttons. The resulting V line of the neck plunges deeper for vests with lesser number of buttons thus creating an illusion of elongated torso thus consequently making the wearer look taller than his normal height. If you are on the taller side then you can try double breasted style of mens suit vest with high neck. If you are in the colder regions it may be better to choose the double breasted style since they can serve as an extra layer for warmth. Even when indoors if you take off the jacket you can still look dressed up.

In recent times you would have noticed that the mens suit vests that come with the three piece suits are little shorter than what they used to be. While this can be a good look when trying it on with casual outfits it is best to keep the ideal length of the mens suit vests for formal wears. Therefore, it is always better to check the length before buying it. While going for the purchase make sure that you wear a proper dress shirt and then try the mens suit vest on it to check the fit and the length. Buying a wrong fit is a great waste of both your money and time.

For styling the perfect look it is important to take into account the fabric and texture of the mens suit vests. If you want a subtle look where the mens suit vest should blend with the outfit it is best to get it as a full set but if going for a mismatched style select one which has simple patterns and a complementing color. As for the fabric of the mens suit vest it is best to choose it with accordance with the season in which you want to wear it. If for colder and rainy months then go for thicker fabrics like wool and tweeds. To keep it cool during the hot days, choose lightweight fabrics like cotton and linen so that you don't sweat much.

As for belts it is better to ditch the style. While some people still argue on wearing a belt with the mens suit vest it is of not much use since most styles cover the waistband of the trousers. For casual styles like jeans and chinos it can be plausible to wear one since they mostly have exposed waistbands.

If you opt for double breasted style mens suit vest then keep your whole outfit to formal style. You can also wear a pocket watch to up the game. For casual styles it is best to go with the single breasted mens suit vests since they are very versatile and can be worn with many outfits.

Now done with basic details on mens suit vest, it is imperial to know how to style the garment. The vests have long been worn as a part of the three piece suit and this was considered to be the height of formal wear for a long time. Even today the most formal events see the men donning these suits. A full suit with the matching mens suit vest is a great option for a business setting or any formal black tie events. For a proper three piece suit the mens suit vest should match the suit both on the color and fabric level. For a business setting this three piece style gives a higher level of class and confidence especially when worn with a tie.

For black tie events wearing a mens suit vest becomes a necessity. The formal style of mens suit vests that are used for these events are usually backless and are held together with an adjustable strap. Some of these mens suit vest styles have lapels and are cut lower than the usual styles. Of you are not wearing the vests then you have the option of choosing a cummerbund. This strip of fabric covers the area of joint of the shirt with the waistband of the trousers thus basically performing the work of the vest.

The mens suit vests have becomes a popular style when it comes to office wear. As said before with increased office settings offering permission for relaxed business attires nowadays some offices even allow mismatched or odd vests given they are styles properly. An odd vest is the one that does not match with the jacket or the trousers in terms of color and even in fabrics. Getting odd vests that match your existing wardrobe can add variety and increase your options exponentially. You can wear this style of odd vests for casual events like a date or parties but you can also style it for your office as a business casual.

While the full three piece suit can look intimidating the odd vests gives you a little casual look but looking every bit as good as the former. Another thing with the odd vest is that they are the trendy style now and a mismatching mens suit vest is going to draw a lot of attention. Thus, it is important to style the outfit so that the mens suit vest complements the whole outfit and works in harmony without overwhelming the look. The added benefit of this odd vests is that they do not have a fixed style, and they can be paired with different styles to which your imagination is the only bar.

While deciding on the color or pattern of your mens suit vest there are some key details to remember. The most famous colors for the mens suit vests are black and gray. While the black vests look too formal and cliché gray vests look great with most of the styles. Pairing a gray mens suit vest with black or gray trousers and a crisp white shirt is one of the best outfits for your office.

The matching full suit is easy but styling the suit with odd vests require a good sense of style and an eye for detail. The mens suit vest for dark colored jackets should be light in shade and vice versa. If you are wearing a mens suit vest with bold colors or texture or anything that stands out then it is best to keep the rest of your outfit simple. The shirt that you match with the mens suit vest should always have a long sleeve. When wearing with the suit you can let it down and when with casual outfits like jeans then you can roll up your sleeves. It isn't always necessary that you should wear a tie with the suit with the mens suit vest. This purely depends on the event for which you dress in the most formal ones needing the tie.

Now comes the most loved style mens suit vests with jeans. Mens suit vests and jeans work exceptionally well. Pairing a proper mens suit vest with any dark denim is a good look. The shirt can be kept simple with the sleeves rolled up to further up the casual look still keeping the whole outfit to a classy level.

Thus knowing how to style the mens suit vests may be one great way to diversify your wardrobe thus giving your own sense of twist for both the formal and casual outfits.

Be the first to know